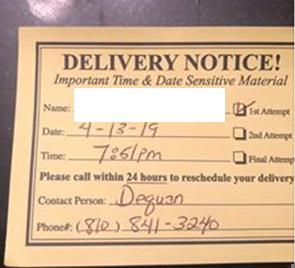 Imagine being away from your home and returning back to an odd “DELIVERY NOTICE!” card at your door or to find out that your teenager received one while you were out.  You may have even received one of these notices yourself or know someone that did.  What was someone trying to deliver?  Why not just leave the package at the door?  Is this some type of scam or is someone looking to gain entry to your empty home?  Even more suspicious is seeing multiple people in your neighborhood posting that they too received the odd notice cards.

Macomb Township Residents have been posting about these random missed delivery cards for a couple of weeks now with most of the stories sounding similar, including one referencing a creepy rusted white work van! If only there were a Macomb County Private Investigator to look into this…

Is this the start of a crime spree in sleepy Macomb Township or a simple misunderstanding?  Being good neighbors, we at ASG Investigations decided to apply our skills – a particular set of skills we have acquired and are well practiced in – to help ease the concern of Macomb residents.  We started where most of the conversations about these “delivery notice” cards were taking place; various local Facebook groups and a local neighborhood messaging app.  We found multiple people talking about these delivery cards and the circumstances surrounding how they received them.  Some residents attempted to locate information about the telephone number that was provided on the cards, but it seemed like that was a dead end, with one resident under the belief that the phone number was bogus or belonged to some type of business outside of the area.  Since a lot of what we do involves searches below the depths of Google, using open source methods to extract as much information as possible out of the smallest details, we decided to take a run at the phone number itself for information that might help.

Our research identified that the phone number that was handwritten on these cards – identified as the same number on each cards that was posted online – was associated with two individuals in St. Clair County, one of which has the same first name as is written on the delivery notice cards – “Dequan”.  The information appeared recent, but all good investigations require some validation.  Using the two names we found to likely be associated with that phone number, we searched some of the more common social media platforms, prepared to go more in-depth if need be.  It wasn’t too long before we located both individuals on Facebook.  Even more helpful were the numerous photos shared of themselves that we could capture and use for later comparison

Thankfully for us, a watchful resident uploaded some Ring doorbell video of one of these cards being delivered at their front door.  The video itself depicted two individuals; one male and one female, allowing us to capture images for comparison against the social media images we found.

Like most of the residents who have seen the video, we found it odd that the man in the video was wearing a suit and tie. 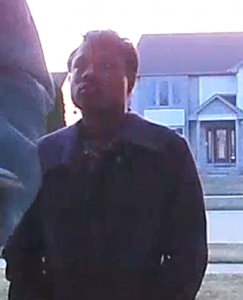 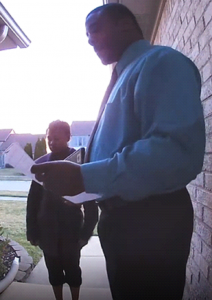 Now listen, there are some really neat and high-tech solutions to comparing images of people to see if there is a match, but it was quickly apparent that those would be unnecessary as the naked eye was enough to show that we had the correct people.  In the video we received, there was a male standing up close to the door and a female standing behind him.  Images of the couple from the video matched what we found on Facebook, which were originally derived from some advanced telephone number research.

Once we had found the couple, the question of what they were doing handing out missed delivery cards needed to be answered.  To our knowledge, no one actually called the phone number (or at least no one posted publicly about doing so).  So, we made the call to see what they would say- what was the deal with the notices?  We should point out that if you are ever suspicious of a phone number, there are some really good reasons NOT to call it.  Being a Macomb County Private Investigator, we on the on the other hand have some nifty tech that allows us to make these calls and even turn a scam around on the bad guys!  In this case, it was more curiosity since the owner/user of that phone number didn’t go to any trouble to hide his identity or mask his relationship with that number; and frankly the profile of the man handing out the cards didn’t appear outwardly suspicious, and certainly not criminal.  He has a public Facebook Profile along with other public social media accounts. 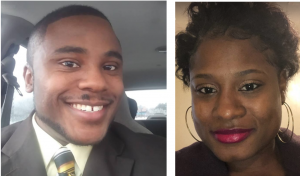 So, what gives with the delivery cards?  Why go door to door, in-person to hand out (really crummy) fake delivery notice cards?  Well, after speaking with the man photographed above, we learned that he was selling Mortgage Protection plans door-to-door for the Leazer Group.  We asked about the delivery cards, but it was clear from the onset of our call that those “delivery notices” are simply a ploy to get homeowners to call back and speak with a sales representative, in this case, “Dequan”.  Dequan claimed we must have filled out some type of paperwork expressing interest in their services, which is why he would have left the notices.  When asked where we would have filled out such a form or if he could tell us how many neighbors in the same area all filled out similar interest forms, Dequan became disinterested in making the sale and politely ended our call.

In the end, while not criminal in nature, it is pretty clear these delivery notices were a crafty way to get homeowners to call for a sales pitch about Mortgage Protection, one that if a homeowner actually returns the call is likely to agitate them when they learn the truth and ultimately feel like they were tricked into making the call in the first place.

The lesson here is that watchful neighbors alerting each other when things don’t feel quite right about a situation pays off and ultimately keeps everyone safer.  As for our sales pitch, we like to do our part for local communities like Macomb because we live, work and play here too.  We are always happy to help businesses and individuals with any of their investigative needs, including employee background checks.  Please give us a follow on Facebook, Twitter and LinkedIn to stay up to date on other noteworthy stories from around the area.